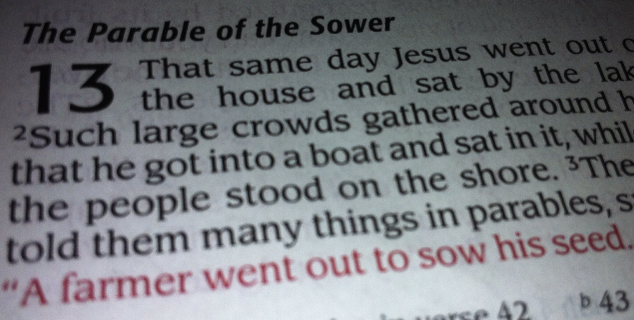 Really? We can start with excitement about our walk with Christ, the good news, and our future with Him, and then can step back, get caught up, and end up who knows where? Am I saying losing salvation? Am I saying never saved? Who am I to say any of this? But what I am saying, is The Bible is drenched in verses about “running the race” (1 Cor 9:24), (2 Tim 4:7), “finishing well”, entering in and hearing our Lord say “well done, good and faithful servant” (Matt 25:21-23). Verses that tells us “a good tree bears good fruit and a bad tree bears bad fruit” (Matt 7:17) implying that those who really encounter Christ, though they struggle, though they have ups and downs, even seasons of misunderstandings and stubble, and though they get bombarded by the world at times, will finish good, will have salvation and will enter into His eternal rest.

Why would I set out like this? Because I sit here today concerned, with people on my mind, thinking what was it that made them so excited at one time, to gather together, to give their time to the things of God, and to to “fight this good fight” (1 Tim 6:12)?

Were they looking to some of the promises someone preached to them, that sounded like their life would be added to? Was it a girl at youth group, who had invited them, and so it all felt so right? Was it that the local ministry seemed like something amazing to be apart off, and they fit in, were finally accepted, and found a place of harmony?

Who knows? But it’s with that thought in mind that I ask us to give attention to the “Parable of The Sower”.

Matthew 13:13 That same day Jesus went out of the house and sat beside the sea. 2 And great crowds gathered about him, so that he got into a boat and sat down. And the whole crowd stood on the beach. 3 And he told them many things in parables, saying: “A sower went out to sow. 4 And as he sowed, some seeds fell along the path, and the birds came and devoured them. 5 Other seeds fell on rocky ground, where they did not have much soil, and immediately they sprang up, since they had no depth of soil, 6 but when the sun rose they were scorched. And since they had no root, they withered away. 7 Other seeds fell among thorns, and the thorns grew up and choked them. 8 Other seeds fell on good soil and produced grain, some a hundredfold, some sixty, some thirty. 9 He who has ears, let him hear.”

The Purpose of the Parables

10 Then the disciples came and said to him, “Why do you speak to them in parables?” 11 And he answered them, “To you it has been given to know the secrets of the kingdom of heaven, but to them it has not been given. 12 For to the one who has, more will be given, and he will have an abundance, but from the one who has not, even what he has will be taken away. 13 This is why I speak to them in parables, because seeing they do not see, and hearing they do not hear, nor do they understand.

Simply put, Gods Word goes out, people hear it, and they receive it, say “yes”, “Amen”, agree, and then there is a response, a season of growing deep spiritual roots, or not.

We see their are four outcomes Jesus puts before His disciples as He explains this parable. Matt 13:18 “Hear then the parable of the sower:

1. Matt 13:19 When anyone hears the word of the kingdom and does not understand it, the evil one comes and snatches away what has been sown in his heart. This is what was sown along the path. = These people hear it, they see what your saying, but don’t respond, don’t have ears to hear, and the lies sown by the enemy into this world, keep them deceived (2 Cor 4:4). They go to a philosophy, a mind set, a worldview, a turning away from the truth, and are not open to The Gospel.

2. Matt 13:20 As for what was sown on rocky ground, this is the one who hears the word and immediately receives it with joy, 21 yet he has no root in himself, but endures for a while, and when tribulation or persecution arises on account of the word, immediately he falls away. = They agree, may get emotional, see the need for change in their life, understand that we need help, and like the idea, but when the actual call to walk as a follower, as a christian, to face hardships, hard times, to be judged as a christian, ridiculed, even hated, begins, they they don’t continue, don’t walk the walk, and don’t abide in Christ. While many have speculated why, this would happen when at first they responded, and said yes, I would have to say, that though they received it in their mind, there was no conversion in their heart, there was no being born again, regeneration of new life, in Christ. When we see in Romans 10:9-10 that if we “confess” Jesus is Lord, this doesn’t just mean pronounce His Name off our tongues, it means truly transformed, bent towards, obsessed with, or as Paul puts it of himself “compelled” (2 Cor 5:14-15). Because Jesus points out that their is no “root in himself” it would mean nothing has happened by way of God transforming their heart. No seed sown, no ability to abide in Christ, no conversion. Jesus told Nicodemus in John 5:3 “unless one is born again he cannot see the kingdom of God.” and unless one is, they cannot.

3. Matt 13:22 As for what was sown among thorns, this is the one who hears the word, but the cares of the world and the deceitfulness of riches choke the word, and it proves unfruitful. = This is where I see the most danger for what we see happening with in true and false believers. Why we see ministries becoming bigger than the call to “Christ’s ministry”, why we see so many things done in Jesus Name, while having secondary benefits. This would be those who are concerned with the “cares of the world”, of having, embracing, and being accepted by what the world is living for.

Though we were saved out of the world, and sent back into it, it wasn’t to be a witness of it, but of Christ, opposites. Gal 1:10 tell us not to concerned with what man thinks of us, or their approval, and acceptance. 1 John 2:15-17 tell us “Don’t love the world’s ways. Don’t love the world’s goods. Love of the world squeezes out love for the Father. Practically everything that goes on in the world—wanting your own way, wanting everything for yourself, wanting to appear important—has nothing to do with the Father. It just isolates you from him. The world and all its wanting, wanting, wanting is on the way out—but whoever does what God wants is set for eternity.”. Jesus even tells them straight “the deceitfulness of riches choke out the word”, meaning the desire for the “things” of this world, the “status” or “achievement” that would be viewed as success for the hear and now.

We know that it isn’t money that is evil, but the “love of money” (1 Tim 6:10), and that we cannot serve two masters, both “God and money/mammon” (Matt 6:24). Crazy huh? Where I would of said, “can’t serve both God and satan”, He said “money”. I say this, to say, is this the most dangerous, of conditions from the parable? Though they lead either to Christ or not, for these above it seems they could possibly have been used by God, pointed to God, even be proclaiming God, but as Jesus said “they honor me with their lips but their hearts are far from Me” (Matt 15:8), like Judas.

Did the job, the bride, the dream of things, the idols of the world come in and break their fellowship with Jesus? Did what they once set out to live for, get choked out by the thorns of this world, as the identity that could have been birthed in Christ, was left for dead? We could of picked up that guitar at youth group, started serving to fellowship with Jesus, even take our skateboards on the road to proclaim His Name, but what happened? Paul tells us to “Examine yourselves, to see whether you are in the faith. Test yourselves. Or do you not realize this about yourselves, that Jesus Christ is in you?—unless indeed you fail to meet the test! ” (2 Cor 13:5)

I posted this to say, God is still God, He did send Jesus to The Cross for sinners and He made us for fellowship with Him. Paul constantly interceded for believers to be granted repentance and then prayed for them to grow in their walk and deeper things of Christ. Because God is “the same yesterday today and forever” (Heb 13:8), His voice is still speaking to us, still inviting us, and still looking to us as a Father to a son. Are you one of His? Are you hearing His Voice today? Do you see where you once where in Him and how He still cries out to you?

In Revelation Jesus speaks of the church in Ephesus saying “But I have this against you, that you have abandoned the love you had at first.” (Rev 2:4). They His followers, His believers, His bride to be, who had once been head over heels in love with Him, and were at the forefront of a move of God, had placed their love in other places, had been spellbound by false idols, and had followed after other lovers. How do we know they were His? Because He called them to repent, He called them to turn, He told them He was knocking on the door to their heart, and they responded. The good tree does bear good fruit! The sheep do hear His Voice! The bride does know the voice of her husband! These are those spoken off below, those I hope of which you are, and those who have “good soil”.

4. Matt 13:23 As for what was sown on good soil, this is the one who hears the word and understands it. He indeed bears fruit and yields, in one case a hundredfold, in another sixty, and in another thirty.”

This site uses Akismet to reduce spam. Learn how your comment data is processed.