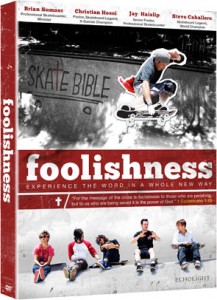 Hear The Gospel as some of the best skateboarders in the world use their gifts for The Kingdom.

Over 50,000 copies in distribution, this movie is packed with over 50 Bible verses, a complete worship soundtrack, and personal testimonies. This movie has been used to share The Gospel to non believers and also encourage Christians worldwide. Be it for a youth group, the church library, a family driving cross country sharing Godly content with their children, or for friends who don’t yet know The Lord, Foolishness is a must.

“I watched this video and was stirred by the stories of the transforming power of Christ. It deserves to be widely distributed and viewed.”
Alistair Begg Parkside Church Chagrin Falls, Ohio.

“To some we are the fragrance of life. To others we are the smell of death. FOOLISHNESS is a movie about real faith presented in a very cool way.”        Brian “Head” Welch.

Family Approved by The Dove Foundation.